The trip of Martin Arnet and his partner Evelyne Rohner leads through Latin America, from Mexico to Argentina – with the bicycle! In the meantime, the two have reached 8,600 km in top-fit condition, left the heat of Central America and the rain of Columbia behind them in order to defy the mountains and the cold of the Andes.

"Discovering the fascinating world of Central and South America with the bicycle has fascinated us for some time. The bicycle gives us our own traveling speed, we can stop and drive on wherever we feel it is the most beautiful. We meet the inhabitants much more frequently compared to driving through by car or bus. As a result, we experienced the fine cuisine of Mexico, colorful markets in Guatemala, large banana plantations in Honduras while cycling. We enjoy spectacular volcanoes in Nicaragua, nature's beauty in the national parks of Costa Rica and the fabulous islands of the Caribbean coastline in Panama. In the end, we also experienced the unbelievable hospitality of the Colombians as well as the beautiful, albeit strenuous mountains in Ecuador.“

With this challenging tour, Martin and Evelyne have fulfilled a life's dream. In the meantime, the two arrived in Ecuador. And: On this trip, the new BikeTool from PB Swiss Tools is also subjected to an absolute endurance test. 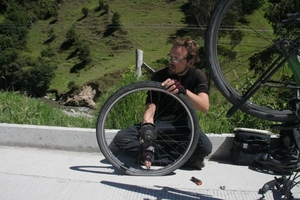 The idea for the BikeTool itself was born much earlier. Let's turn the wheel of time back – to the fall of 2009. At that time, the touring cyclist Martin Arnet approached PB Swiss Tools.

"For every bicycle trip, whether it is on a Sunday afternoon or on a longer trip, there was always the question which repair material to bring along.

I prefer "real" tools the most, including on the road. A regular hex key L-wrench simply fits better in the hand than one of the many other multi-tools that are available for bicycles.

In 2009, when I compiled the suitable tools for a longer bicycle trip, I was looking for an option to use a commercial tool with as many functions as possible with a minimum weight.

An adapter, with which I could use regular, standardized bits with a standard hex key L-wrench, seemed like a practical solution. There are already different systems with exchangeable bits. But either they require special bits, the handle part is too large or not suitable for the bicycle. A 5-mm hex key L-wrench appeared to be the best solution, since these screws are found most often on bicycles.

After a few searches and inquiries at various companies, I realized that such an adapter did not yet exist. PB Swiss Tools was the only company that did not simply turn me down, but contacted me and manufactured a prototype.“

The simplicity of the tool and the use of standardized hand tools made it possible that PB Swiss Tools produced the first prototype within two days. Martin Arnet participated in the further development. His many years of experience as a biker are valuable for the product development.

Two months later, it was possible to present the optimized prototype to a larger group of test persons. Valuable suggestions for improvement and positive feedback encouraged us to advance the project with high priority.

During the entire development time, quality and material were continuously tested and market standards were checked. The results and findings entered into the development of the BikeTool.

In the spring of 2010, the requirements for ergonomics and design were finalized. The collaboration with industrial designer Paolo Fancelli could begin. Functionality, robustness, small size and minimum weight are important characteristics that had to be combined in the BikeTool.

In the fall of 2010, one year after the initial contact by Martin Arnet, the solution for the new product was ready. The manufacturing of the components could start in order to manufacture the preproduction series by the end of December 2010.

We would like to thank Mr. Martin Arnet for his ingenious idea. We are proud to introduce a lightweight and compact BikeTool on the market. The result is a BikeTool that is as stylish as it is handy, and allows successfully performing all types of bicycle repair and adjustment work everywhere in the world.

We wish him and his partner an enjoyable and accident-free travel for the remainder of the trip!

More information about the trip