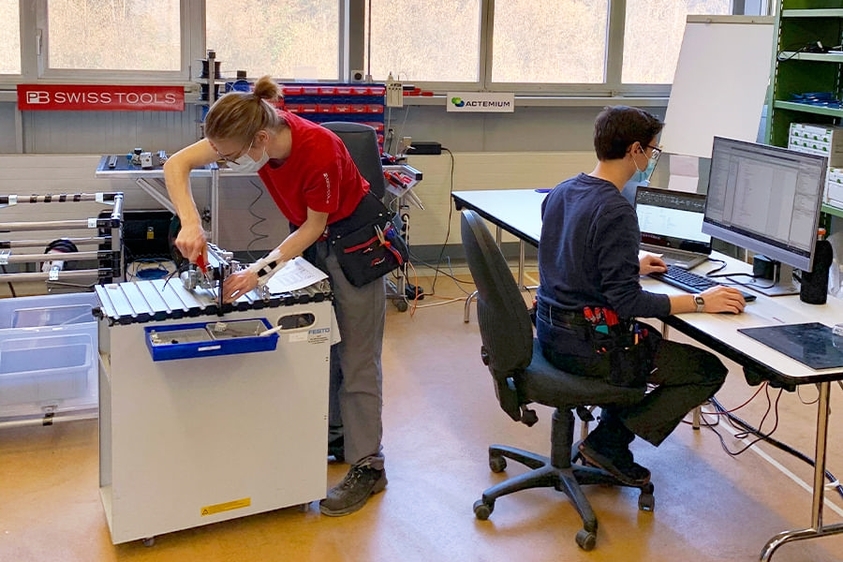 The o(h)mens are good for success at WorldSkills 2022

With hard training, a professional trade can also be a top sport. The best up-and-coming professionals compete every two years at SwissSkills and the winning teams represent Switzerland at the international vocational championships, WorldSkills. PB Swiss Tools is proud that Dario Flükiger and his team colleague Adrian Matthys (Actemium Switzerland) have qualified for the 2022 world championships in Shanghai in the mechatronics section. Take a look at the meticulous preparations for this challenging competition featuring 40 teams from around the world.

The WorldSkills Competition had to be postponed due to the pandemic. But now the new date has been confirmed: From October 12 – 17, 2022, several thousand young professionals from all over the world will be competing in Shanghai in around 50 disciplines. Switzerland is sending a pretty strong team, consisting of Dario Flükiger from PB Swiss Tools and Adrian Matthys (Actemium), to take part in the mechatronics section. It might sound like the competition is a long way off, but training is already getting underway today – because the team has set its sights high and the competitors, particularly from Asia, are known to be extremely strong.

But the Swiss have good prospects: At the last three competitions alone, the mechatronic engineers from Switzerland have collected a complete set of medals.

In their first task, Dario and Adrian have to set up, program and commission a miniature production system for sorting workpieces in just 90 minutes. This is a warm-up training for team building and task distribution because at the WorldSkills Competition they will have to solve much more complex tasks in three times the time spent today. To work through the tasks as efficiently as possible, Dario is responsible for assembly and the mechanical functionalities while Adrian only lends a hand with certain assembly steps and the rest of the time mainly sets about accurately programming the system.

It is a lovely Saturday morning and the two exude self-confidence with faces almost as radiant as the sun. And it’s not a surprise because they have perfect conditions at PB Swiss Tools with their own training room in competition dimensions and, of course, all the precision tools a technician could hope for. They have to take test systems apart, put them back together again, program them, check functions, find and remedy errors – as precisely and quickly as possible, fully adhering to the specifications of the trainer team. But what at first glance would seem to be a series of routine tasks, is in fact a permanent race against the clock, collecting points along the way and taking as much care as possible.

Maximum concentration, well-rehearsed processes and precision in assembly and programming are what you need. Along with nerves of steel. Because every point counts. And that means that even tactics can play their part: “We would rather lose a point for an indicator lamp that is not connected and invest the time gained in ensuring a fundamental function works perfectly,” reveals Adrian Matthys with a glint in his eye. But knowing the two perfectionists, they won’t need to rely on such tricks at the end of the training program sponsored by their employers, which includes up to three days of training per week. And a confident Dario Flükiger adds: “The tools from PB Swiss Tools sit perfectly in your hand, are precise and simple to differentiate – this is how I gain time in assembly and that means that, together, we can naturally make sure that that last indicator lamp comes on.”