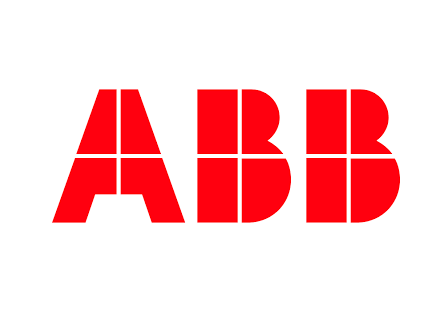 PB Swiss Tools produces high-quality tools and medical instruments for the global market in its factory in Emmental. In order to continue improving process efficiency and quality, the company is also investing in automation solutions. For example, PB Swiss Tools has recently become the first Swiss company to purchase an IRB 1300 from ABB and has integrated this into an OmniCore production cell along with another robot.

PB Swiss Tools hand tools are used by professionals on every inhabited continent. The quality of the tools is legendary. The traditional company offers a lifetime guarantee on material defects and manufacturing errors. Thanks to a serial number on each tool, all of the production steps right down to the raw materials used can be traced, which is a requirement for medical instruments.

Enormous vertical integration at the company locations
Production takes place exclusively at the two locations in Emmental – Wasen and Sumiswald. The vertical integration is enormous; “Swiss made” writ large: PB Swiss Tools manufactures everything itself on site, using delivered raw materials such as bars of especially hardened special steel or plastic granulate. Equally comprehensive is the high-tech machinery for metal and plastic processing as well as for electroplating, which are used to produce the components for the tools.

There are 17 ABB robots currently being used in the production of our tools. “We are constantly developing new products for our customers as well as improving existing production workflows with the aim of safeguarding our competitive position in relation to competitors from low-cost countries,” said Eva Jaisli, CEO of PB Swiss Tools, before commenting that it is also important to ensure the greatest possible flexibility in production, as the tools are produced in numerous versions. The automation of work steps helps to maintain Switzerland’s position as a production location and also allows for growth – in our workforce, too. “We now employee considerably more people than we did eight years ago,” stated Jaisli.

Recoilless thanks to movable weights
One of PB Swiss Tools’ best-selling products is the dead-blow hammer. Movable weights incorporated into the hammer head swing in the same direction as the hammer blow, and in doing so allow for full and accurate hammer strikes without any recoil. “For this purpose, we insert steel washers in the hammer head in such a way that they are strung on a pin and can move freely,” explained Heinz Kobel, who works as an Engineering Project Manager at PB Swiss Tools and can look back at a 35-year career with the company. 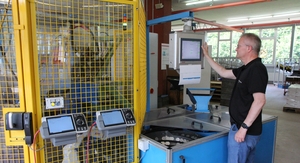 Heinz Kobel stood next to the new OmniCore robot cell.

“We had previously partially automated this production step with a robot. In order to improve production speed and improve accuracy, we decided to build a new robot cell for automated production,” said Kobel. The team headed by Heinz Kobel integrated and programmed the robot themselves.

Two new ABB robots integrated into the cell
For the new cell, he evaluated two new material handling robots which would complement an existing welding robot in its own cell. “Due to our good experiences, we contacted ABB again to take a look at their robots,” explained Kobel. “They suggested two new robots from their portfolio – the IRB 1100 and the IRB 1300. We were impressed by the benefits they would provide.” 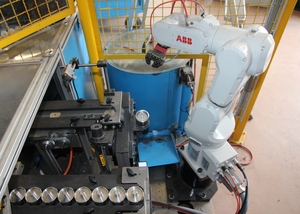 The IRB 1300 launched in 2020 is faster and significantly more lightweight than its predecessor, the IRB 1600. It also offers a load-carrying capacity of up to 11 kg. Launched on the market at the end of 2018, the IRB 1100 is now the smallest and most-lightweight six-axle robot produced by ABB. It replaces the IRB 120. Both robots are operated with the new, compact ABB OmniCore control unit and offer the maximum path accuracy.

The first robot cells in Switzerland to be exclusively made up of OmniCore components
“PB Swiss Tools is the first customer in Switzerland to acquire an IRB 1300 and the first company to realize a robot cell exclusively made up of OmniCore components,” stated Olivier Keck, the responsible ABB sales engineer. “This shows that the company is not only dedicated to breathing innovation into the development of its new tools, but can also count itself as one of the pioneers in terms of optimizing production.” Heinz Kobel’s team also integrated and programmed this new OmniCore cell with the two robots itself in spring 2021 – with the help of, among other things, the ABB RobotStudio simulation software.

The smaller of the two robots in the cell – the IRB 1100 – is agile and responsible for precision work. Its job is to pick up and precisely insert the automatically supplied washers. To do this, the IRB 1300 – the versatile all-rounder in this robot team – puts down a lower part of a hammer head in front of it, which it checks for any troublesome steel chips using a sensor. The IRB 1100 then uses its vacuum gripper to insert a pin and subsequently threads the washers onto the pin one by one. 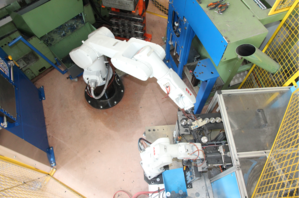 The two new ABB robots working together side by side.

Also takes care of handling for welding systems and lathes
Once it has inserted the correct number of washers, the IRB 1300 attaches the head piece of the housing and places the hammer head in a welding system so that both parts can be firmly connected. The robot puts the hammer head down briefly to let it cool and then places it in a CNC lathe, where the weld seam is removed.

Afterwards, the IRB 1300 passes the hammer head into an adjacent cell, where an ABB IRB 1600, which has been in use for some time already, places it in a second welding system. Here, the hammer head is welded together with the shaft handle. The three robots carry out all of this work as part of a fully automated process.

Producing seven different sizes
PB Swiss Tools produces dead-blow hammers in seven different sizes, with approximately 80,000 units in total being manufactured every year. It takes three-quarters of an hour to change over the cell to another size, which normally happens once a week. 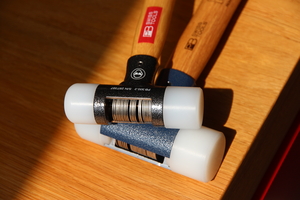 A view of the inner workings of the dead-blow hammer.

“With this new cell, we have achieved our goal – we can produce a larger number of high-quality hammers in a shorter period of time. More importantly, however, the new ABB robots work extremely precisely and reliably,” said Kobel. “Safety and quality take the highest priority with this tool, which can be used in aircraft construction and in the automotive industry.”