PB Swiss Tools Young Talents on the Hunt for Medals at WorldSkills! 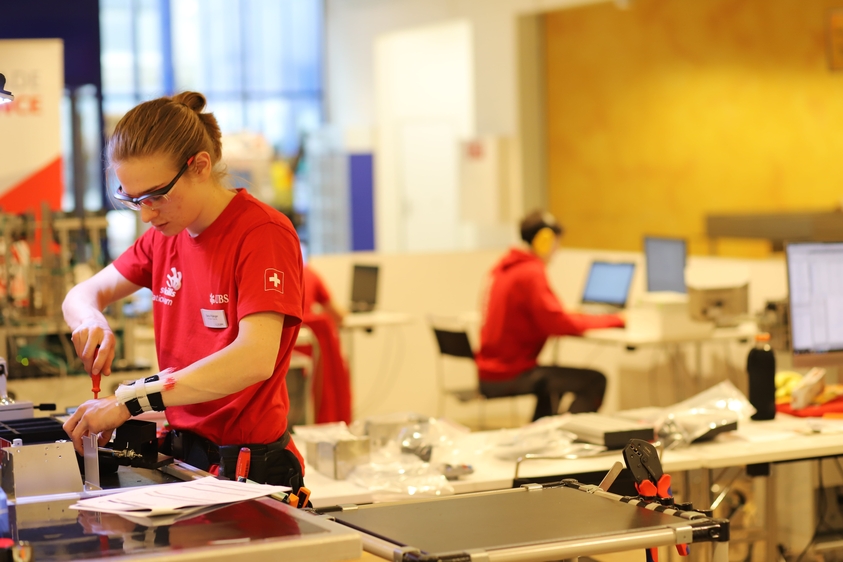 Dario Flükiger is in his final year of his apprenticeship as an automation engineer at PB Swiss Tools and as a winner of a gold medal at the Swiss championships for vocational skills, he is already considered to be one of the best in his field. Together with his team colleague Adrian Mathys (Actemium), the outstanding engineering athlete is now setting his sights on winning international gold and is preparing meticulously for WorldSkills. A couple of days ago, the two talented automation engineers clearly demonstrated their impressive form at a public training session in the Gäupark Shopping Center in Egerkingen.

From Emmental to uptownBasel and then onto Shanghai – it gets serious on October 12, 2022!
Our national team are still in training on home soil. After the first training phase at PB Swiss Tools, Dario and Adrian are now getting ready for the international competition by training three days a week on the uptownBasel innovation campus. In comparison with the hard work put into their preparations by some of the foreign delegations, it appears that the Swiss team are training at an almost moderate rate of intensity. Some national teams have been training for up to ten hours a day, six or seven days a week for the last year! From October 12 to 17, 2022, our Swiss vocational athletes will face up to extremely strong international competitors, hailing from 85 nations around the world.

Highly professional preparations with training sessions and public test competitions
To ensure that the Swiss national team can grow accustomed to the international level on which they will be competing, our vocational athletes are being prepared for the competition in Shanghai by a team of very experienced trainers. The head of the mission , Olivier Habegger, has already been the head of a delegation to a WorldSkills championship three times and thus has first-hand knowledge of what is required and the level of the competition. The preparations for WorldSkills includes public training sessions in a shopping center and in the Swiss Science Center Technorama, as well as an international test competition between the German, Austrian and Swiss national teams. In this realistic comparison, our vocational athletes will be able to measure themselves against renowned industrial nations and also socialize and establish ties with the other German-speaking participants.

A challenging two-day public training session in the Gäupark Shopping Center in Egerkingen
The task thought up by the trainer Nicolas Godel – which involves the construction and programming of a miniature packaging system – was quite tricky and peppered with all sorts of challenges. The setup was actually designed to be held over three days, but the vocational athletes had to complete the task in just two days. Godel also included two more challenges in the tasks: Instead of a vacuum sensor, the materials provided to the athletes included a pressure gauge that was identical in appearance. In addition, the basic configuration of the control software that they were initially provided with was rather unsuitable for programming. “With the help of such situations, the young vocational athletes are learning to scrutinize every work step and also to make allowances for the seemingly impossible when troubleshooting,” said the trainer with a wink of the eye in justification of the obstacles that he snuck into the training session.

A practical task and a simulation of an authentic competition
The assessment criteria cover a wide range of topics:

Godel – the trainer – designed the public training session to be as realistic as possible. From the briefing to the task assessment, all conversations were held solely in English. Even the rituals in the competition environment were kept exactly the same as they would be in the competition proper. The test task of designing, building and configuring a system for the packaging industry was largely consistent with the setup of the previous competition. Different types of small pots had to equipped with lids of different colors according to the respective order set up on the control panel. In so doing, the system had to be able to properly identify the color and size of the lid and the type of container, and then combine the components accurately. In the event that the magazines were loaded incorrectly, the incorrect parts had to be rejected and sorted out of the system. This is because malfunctions are also simulated in the assessment and the reliability of the system’s response is also evaluated.

Creativity, speed and accuracy – the most important success factors
The competition is always a race against time. However, our automation athletes were able to manage their time perfectly. The young automation talents presented their system to the jury with five minutes still left on the clock. “The PB Swiss Tools precision tools put us at a considerable advantage during the assembly stage thanks to their fitting accuracy and the color coding system. Simply put, ‘Work with the best.’,” said a smiling Dario Flükiger. “When every second counts, I am grateful for always having the right screwdriver close to hand so that I can secure and fit the components to the support rails quickly and accurately. And in such a miniature system, our 30° L-wrenches with a ball point make tightening concealed hexagon socket screws much easier.”

Committed to winning a medal – a great deal of work for athletes and their families, employers and sponsors.
The athletes have had to put up with a lot of stress and a great many restrictions, ranging from the postponement of secondary school and the start of their studies to the numerous overnight stays away from home every week on their training days. However, the people close to the athletes are also helping them. Their employers are fully committed and are continuing to pay their wages, and their families – from their siblings to their grandparents – are also diligently supporting the project. The previous winners of gold medals scored 98 out of 100 points. Thus, the results at the top hardly differ from ski racing – every point counts! The participants also need a healthy portion of good luck. And that is what we, here at PB Swiss Tools, wish Dario Flükiger and his team colleagues with their performance in Shanghai.

PB Swiss Tools will continue to place a strong focus on young talents in the future – such as the SwissSkills winner Dario Flükiger, who will represent Switzerland at the WorldSkills competition in the fall. 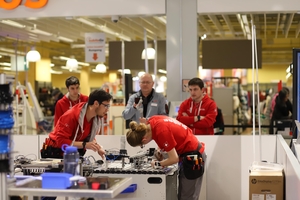 Dario Flükiger and Adrian Matthys not allowing themselves to be distracted from their work despite the large number of visitors in the Gäupark Shopping Center in Egerkingen.