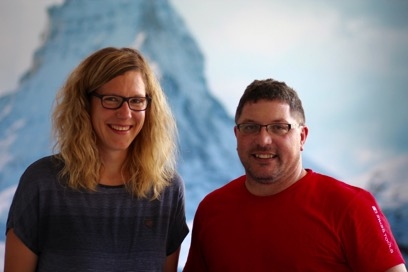 Rita Gerber and Matthias Flückiger participated in a non-smoking seminar called “Easyway” with the financial support of PB Swiss Tools. What good did it do?

The most important first: Rita Gerber and Matthias Flückiger both smoked their last cigarettes on November 7, 2017. And that’s the way it has stayed, even though they had smoked 13 or 22 years respectively.

On that day, they were invited by PB Swiss Tools to take part in an Easyway non-smoking seminar, a method developed by former chain smoker Allen Carr after countless unsuccessful attempts to stop. Carr found a way to quit smoking from one day to the next, wrote a book about it, and started giving courses. These courses are available in many countries today - including in Switzerland.

“We don’t talk about the negative consequences of smoking”

According to a study by the Medizinischen Universität Vienna, the success rate is more than 50 percent. That is impressive considering the strong addictive structures that smokers develop. What makes the Easyway Method so successful?

“We approach things completely differently,” explains Martin Böhler, who led the seminar course for the PB Swiss Tools employees. “We don’t talk about the negative consequences of smoking - every smoker already knows the shocking pictures and warnings on the cigarette packages. We don’t speak about quitting. Instead we ask: Why do you smoke? And does it make sense to keep smoking? This breaks down the justifications for smoking as well as the feeling of loss that is feared when one doesn’t smoke anymore. One is always afraid that something will be missing. That is where we begin.”

A low-threshold offer without pressure

Martin Böhler knows what he's talking about. He himself had smoked for 20 years and quit using the Easyway. It’s important to approach it using a low threshold method because there is a lot denial involved in smoking. “The first step is a one-hour informational presentation where there is no obligation by participating. It’s just about listening. Then you decide whether you want to attend the one-day seminar, and then later also a follow up. There is no compulsion and no pressure. But the fact is, afterwards, many course participants simply no longer see the point in smoking. The attitude is: I could keep smoking if I wanted - but why should I?

Rita Gerber and Matthias Flückiger were 2 of the 17 PB Swiss Tools employees who signed up for the course in the fall of 2017. The pre-course information presentation was obligatory for all smokers at the company so that they could get an idea of the method and decide whether or not they wanted to participate.

In their interview, Rita Gerber and Matthias Flückiger described how they experienced the seminar - and how they feel today as non-smokers.

Had you been thinking about quitting smoking for a long time?

Matthias Flückiger: Not me. I had been smoking for twenty-two years. I actually didn’t go to the course so that I would stop smoking. I just went to listen.

Rita Gerber: It was about the same for me. I had had the idea of quitting in the back of my mind for a while, but I had no idea when. The right time is famous for never arriving. It was similar for me as Matthias: I registered for the course after I attended the info event.

How did you experience the course?

Matthias Flückiger: At the info event, they said we could keep smoking. I thought that was strange, and I thought: That can’t be right. I’ll never quit smoking like that. Then came November 7. I went, still thinking that this isn’t going to work, just by listening. Then we learned what we are actually smoking – insecticide. I’m a trained gardener and know about all the protective clothing you need to wear so you don’t get sick. So I had to say to myself: No more of this.

Rita Gerber: I was sitting outside, smoking a cigarette before the course began on November 7. Then the course started, and the worst for me was that the course leader spoke without interruption about smoking. I could barely stand it. At eleven o'clock I went out and smoked more ‘greedily’ than I ever did during my lunch break. Later, at one-thirty, so we said at the time, we were going to smoke our last cigarette, but it didn’t feel so bad. Then I went home and didn’t feel any need for a cigarette.

Why was it suddenly no longer important to you?

Rita Gerber: It was similar to what Matthias explained. I originally worked in the garden sector and the point about the insecticides made me stop and think. I was also aware that the motivation for smoking is like brain-washing. The course leader asked us: What do you do when you feel stressed? As smokers, we go out and smoke a cigarette, but that doesn’t reduce the stress. We think that when we go have a smoke, the world will look rosier but in fact, the opposite is true. You actually create more stress because you need to use the time for smoking.

The environment is an important factor. Is it uncomfortable when a lot of people are smoking and all of a sudden you aren’t?

Matthias Flückiger: I have a lot of friends who smoke. It was important for me to be able to still be with them and treat them the same as before. I wanted to know what it was like, so I got together with people who smoke right away. I wanted a confirmation that I could stick with it, even if others were smoking, or when I drank alcohol. It worked. And it was a good feeling to be able to stay strong.

Rita Gerber: Soon after the course, we had our company Christmas event. That was interesting. I still like to go outside with the smokers. People make comments about me not smoking anymore, and they ask me whether the course was any good. I think that if the course was offered again in one or two years, there would definitely be people who would attend.

Have you never slipped into temptation since November 7?

Rita Gerber: No. It was actually easy. Winter came shortly after I quit, so it was always inconvenient and unpleasant to go outside in the cold to smoke anyway. At first I thought that I would miss smoking in the spring, when you sit outside together and have a glass of wine, but that wasn’t the case either. Even when a few people started smoking in the group: I still like the smell, but I don't miss it.

Matthias Flückiger: No. I do not smoke anymore, not even occasionally. A cigarette now and then actually doesn’t exist. Either you smoke or you don’t.

What are you going to do with the money you save?

Matthias Flückiger: It was about three hundred francs a month for me. We’re using it as a ‘pot’ for landscaping work around our house.

Rita Gerber: I’m using it for a trip to Canada.

Thank you very much for talking to us!

PB Swiss Tools invests in the health of its employees. It irregularly offers smokers the chance to participate in an Easyway seminar - at no charge and during work hours.

Other posts on the topic of “Health in the Workplace”:
<link de aktuelles detail ergonomie-am-arbeitsplatz-kommt-allen-zugute>«Ergonomic workspaces benefit everyone» Stand and sit better thanks to ergonomic aids